allez: Digging Deep on Blue #49– A Day in the Forests of Fontainebleau 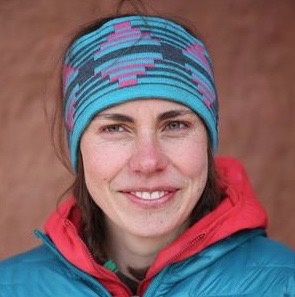 These days, Jane spends most of her time on the road seeking out ideal climbing conditions and new places. Though climbing is the driving force in her life, she also finds inspiration in baking, fermentation experiments, public libraries, and running. Currently, she is learning that #vanlife is more than just sunsets and rainbows as she and her partner, Eric, embark on an elaborate automotive project involving their 1985 Westfalia. 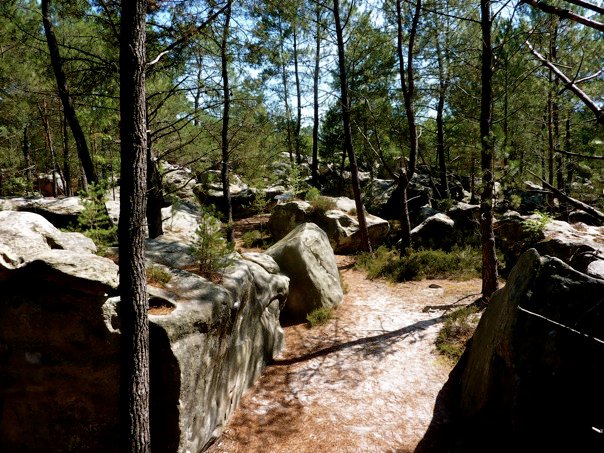 I wipe my feet on the ground and stare up at the next 8-foot section of rock I have to climb. My arms ache, the sun blazes on the wall in front of me and my fingers feel sweaty as I dig into my chalk bag. I look at the little blue number in front of me and my gaze follows the small blue triangle as it points to the right. I can see a few small features where my hands are supposed to go, but there isn’t much time. The sun is getting low in the sky and I have to get off this circuit before dark. I pull onto the wall without spending too much time looking at the problem, I want to keep moving. 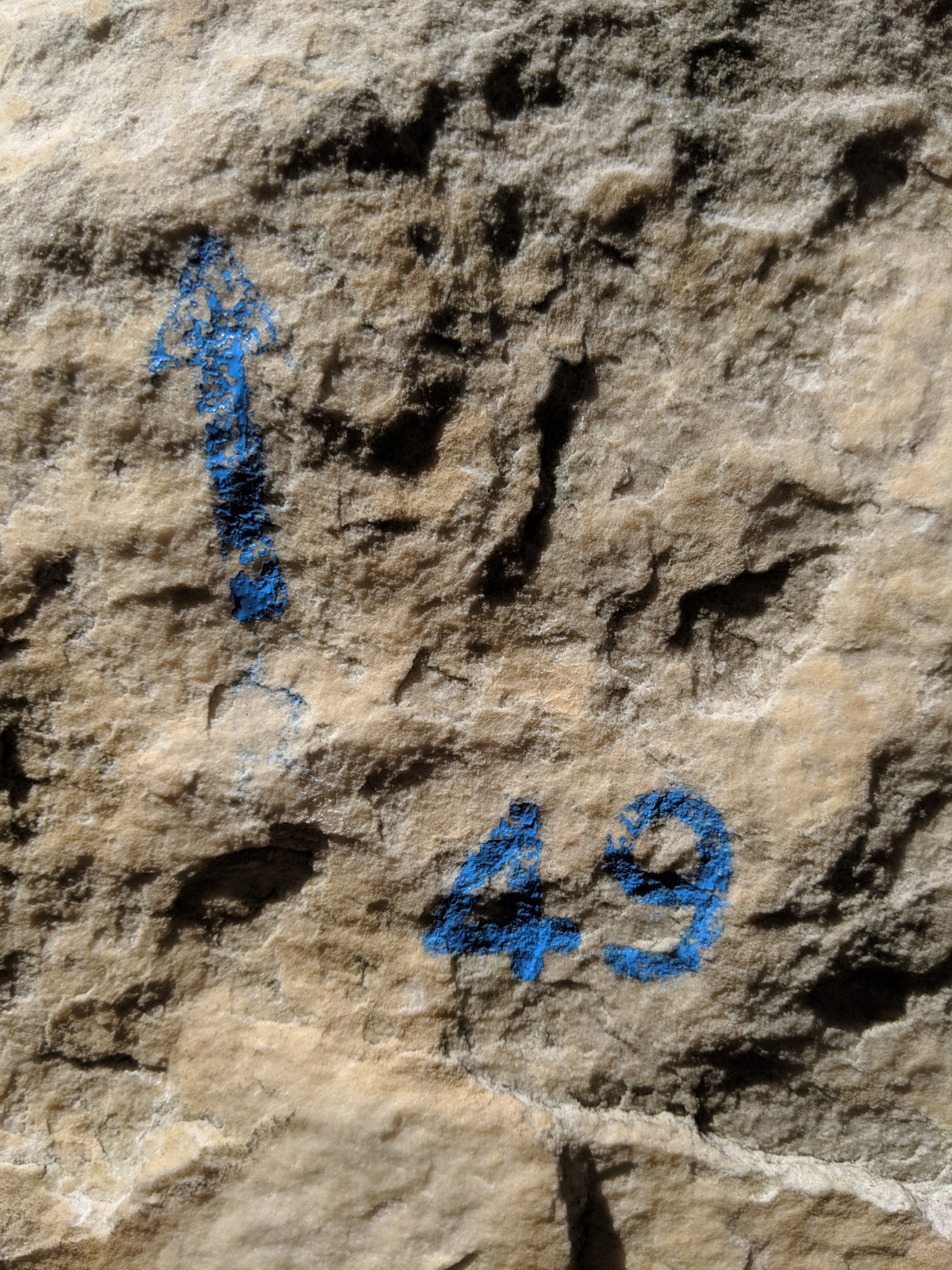 I pull onto the tiny, rounded crimps and smear my feet on the sandy slab, a few feet off the ground. I see that the holds lead to the left and I follow them, delicately traversing the face of the boulder. Somewhere in the middle, I realize I am too high and am forced to downclimb. I'm starting to get pumped, chalking up and shaking out in the middle of the small face. I see a large foot ledge down and to my left. There's no way I can reach it from my current position. I chalk up again. A delicate step-through, reminiscent of another slab much, much higher off the ground, is required. I don't want to trust my foot, but I do for an instant and stab my left foot out to the small hold. I let out a yell. For a moment, I forgot I was only feet off the ground, in the middle of a popular bouldering area, and instead, I was on the north face of Mount Hooker, or high on Fairview Dome, or Middle Cathedral Rock!

I continue across the small sandstone boulder until I see another small triangle, pointing up. I quickly summit the boulder, squint my eyes and scan the forest for the next number. I have to keep moving.

In the past, I’ve struggled to enjoy bouldering because I found the pace too slow. When I started climbing, I gravitated toward the mountains. I liked to be breathing hard, to have woken in the dark and walked for a few hours before the sun rose. To feel my lungs ache as I tried to keep up with my climbing partners who seemed to always be a few steps ahead of me on the trail. I wanted to climb El Capitan, and I wasn’t concerned with how. I didn’t think too much about difficulty or hard movement. 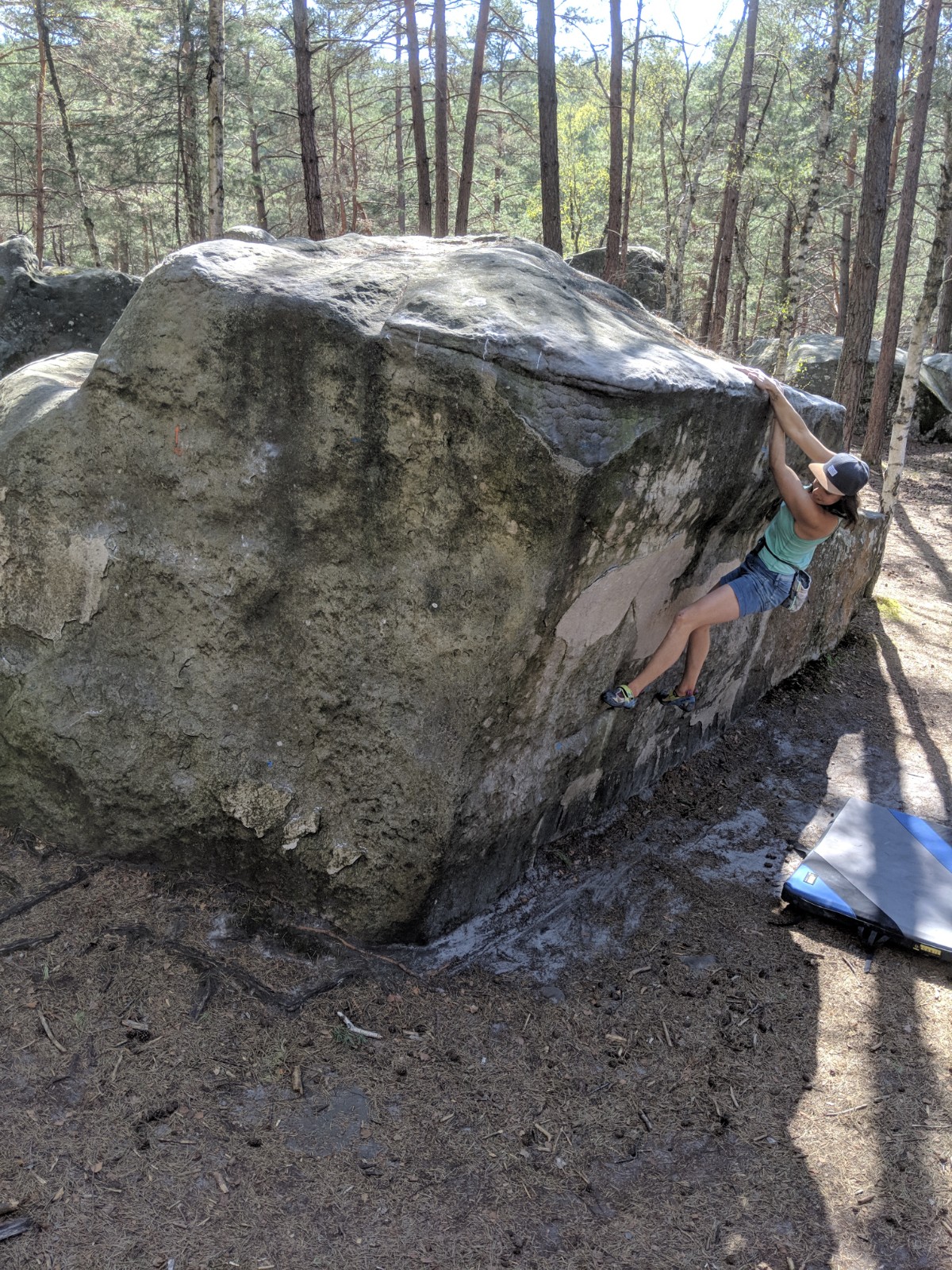 But, as I have grown as a climber, I have realized that bouldering is integral to becoming a better climber; and so, I have begrudgingly become one – first acquiring a crash pad, then a boar’s hair brush, then another boar’s hair brush, then a file, then a $7 roll of incredibly sticky tape so that I can cover the splits I created in my fingertips from trying the same move repeatedly. 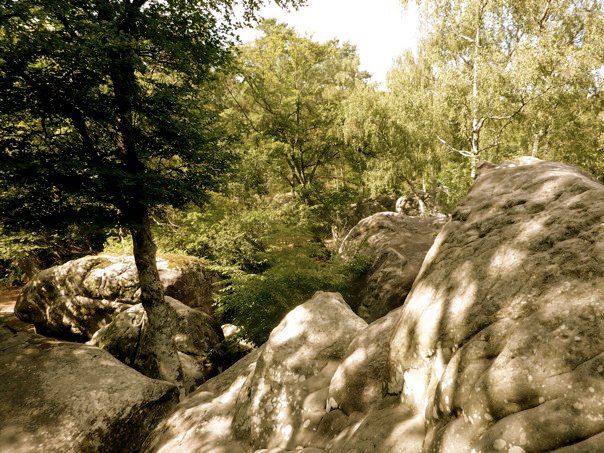 The circuits of Fontainebleau are historic and infamous. Beautifully painted numbers organize hundreds of boulders, and thousands of problems, into athletic scavenger hunts. The colors give you an idea of the difficulty of each problem, but the range in each color set is wide and humbling. The movement, from the climb itself to the downclimb, to the search for the next problem makes completing an entire circuit a serious feat.

Some of the boulders in the forest are incredibly polished, a slippery patina covers the footholds and handholds from literally decades of use. The worn rock is a reminder of the history of climbing here.

My eye follows the small arrow atop problem #49 to the final problem in the circuit. #50 has four or five French men, with an age range between 25 and 60, gathered around its base. Nervously, I approach the group, my lack of language skills and general shyness have me wishing I could skip the last one. But of course, these circuits were made to refine one’s skills and train for the mountains – so bailing is not an option. 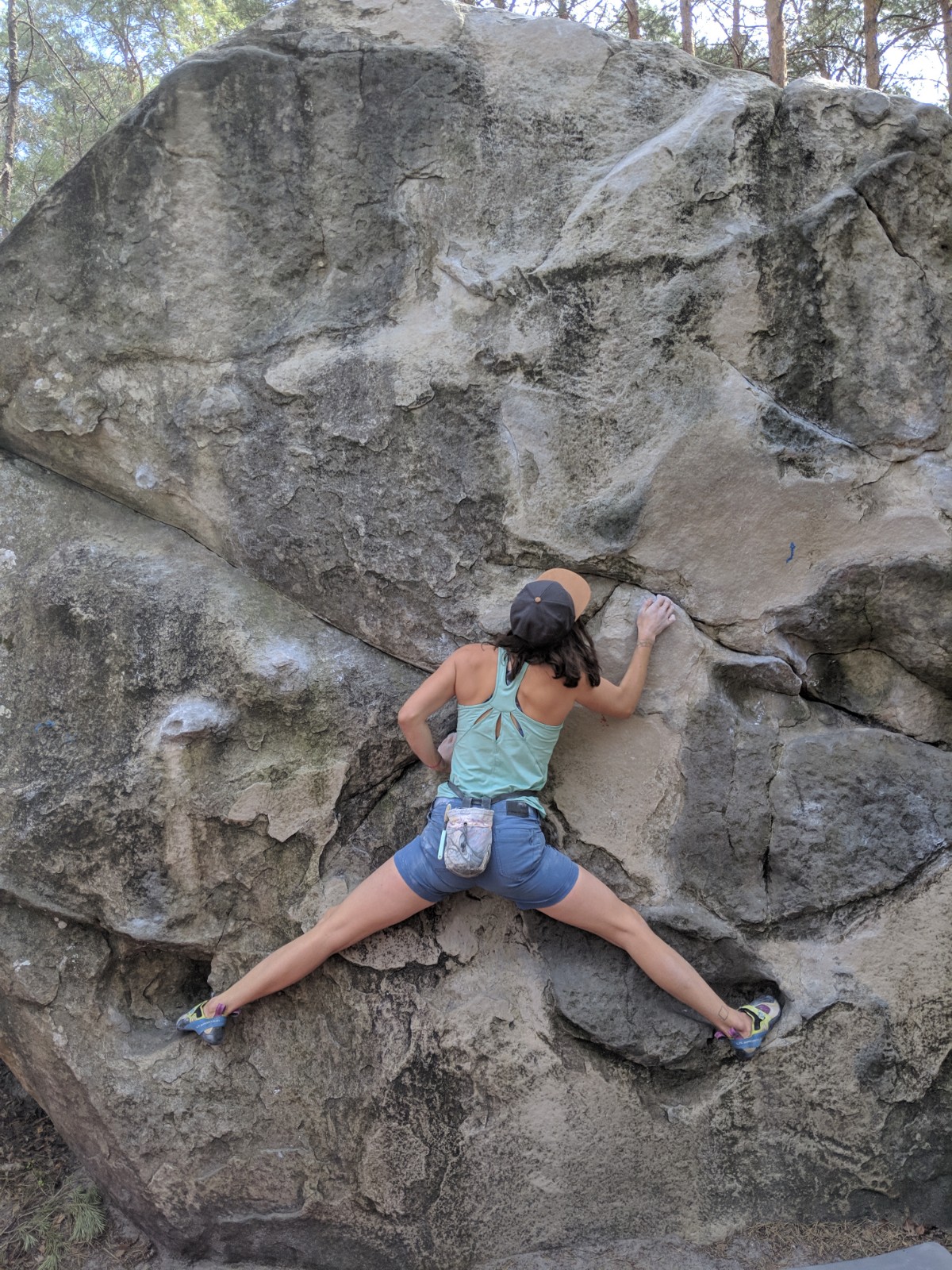 I walk up to the group, shyly utter my “Bonjour” and point to the problem, gesturing my desire to cut the line and climb through. It’s a tricky one – I’m unsure of how to read it. On my first attempt, I use an adjacent rock with a blue dot on it as a foothold, as these blue dots sometimes hint at where one’s foot should go. I fall, and the older men in the group shake their heads disapprovingly. “Tricher,” they say, pointing to the rock and frowning. One wags their finger in my direction, Oh, cheating, I think. Embarrassed, I try the problem again, this time without using the blue-painted foothold. I lunge for the lip and skitter my feet up the wall, desperately throwing my heel above my head. I rock onto the foot and stand up on top of the boulder. I look down at my referees and they nod approvingly. One even shouts “Bravo.” 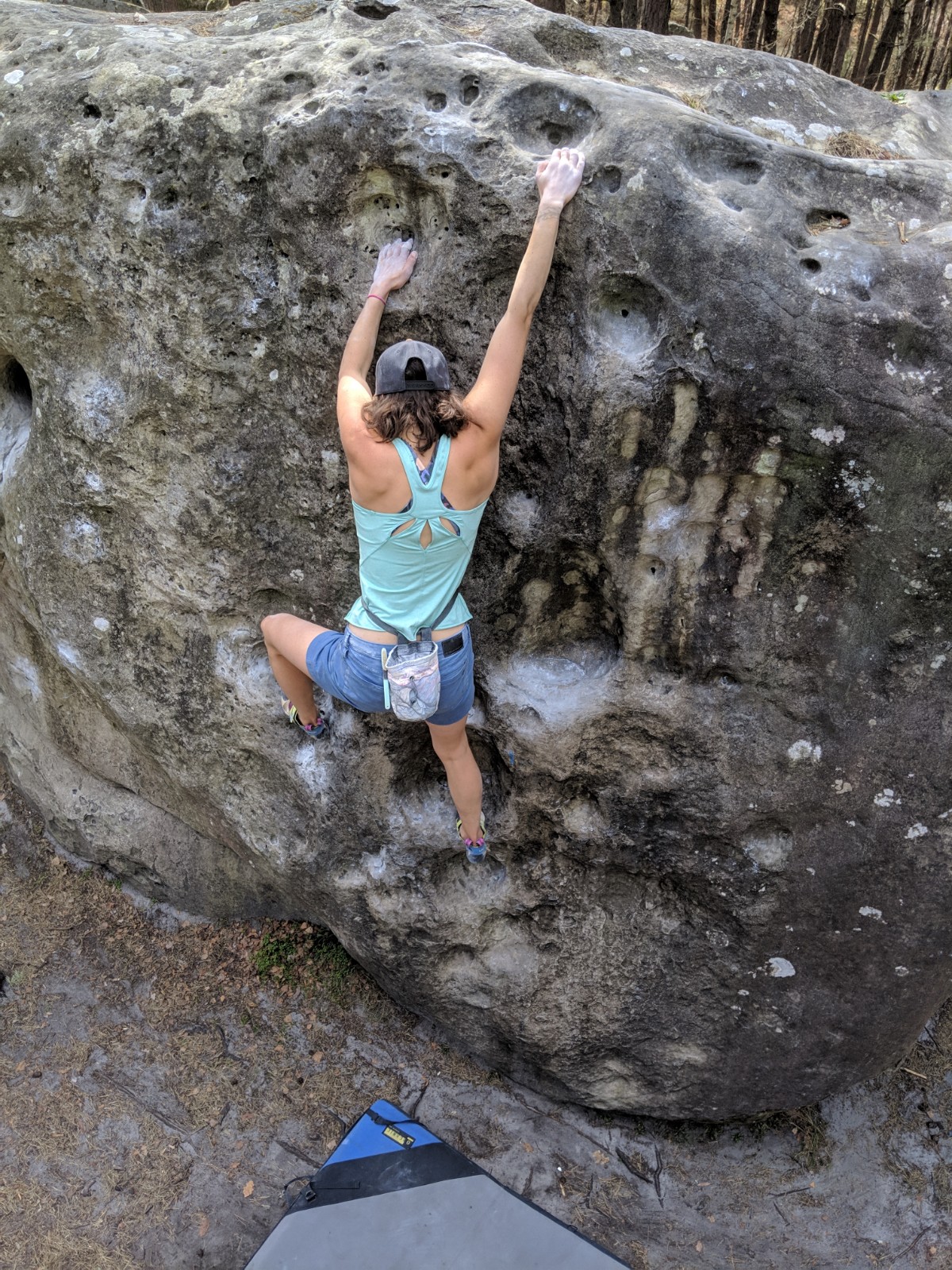 Instead of finding the rappels and worrying about finding the right descent gully, I simply lower my legs off the edge of the boulder and place my feet on the soft, sandy forest floor. I give a nod to the French men, silently thanking them for keeping me honest. The little painted numbers dance and wink through the filtered forest light. The quick flashes of blue, red, orange, and white whisper to me to come back, to keep moving.

An Off the Couch Audio Book: The Tower

I loved this little story about bouldering in “The Font” !
Spent some time there many decades ago, and loved it.
So happy it is still a historical bouldering area !!