allez: Five ways to deal with a high-fear climbing day

Feel the fear (maybe don’t), do it anyway.
Five ways to deal with a high-fear climbing day. 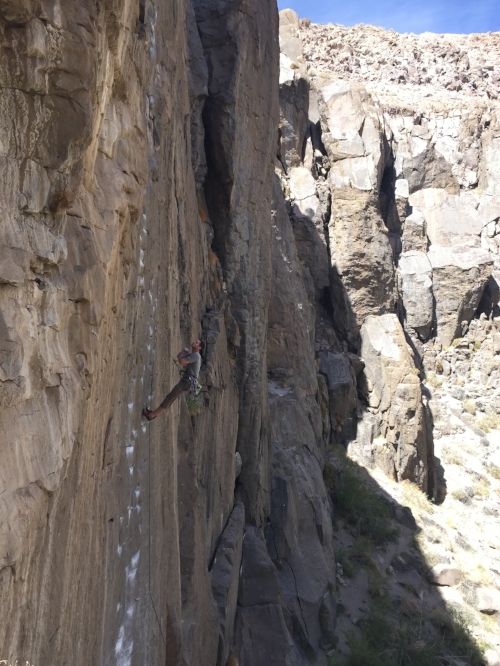 “Feel the fear, do it anyway.” — Some non-climber, who was wrong

We climbers are familiar with “high-gravity days,” when it feels like the earth is exerting extra pull and we climb so poorly it’s laughable, slipping off jugs and flailing on moves we should hike. Less acknowledged are the dreaded “high-fear days,” when the body is willing but the mind wants to have nothing to do with climbing, and so screams at the body to return to the earth. Sometimes it’s because we’re stressed about life stuff or slept poorly or are rusty after a prolonged winter in the gym, and sometimes the fear just comes on at random. Rarely do these high-fear days have anything to do with how risky the climbing itself is. I’ve even had them at the gym, the boulders, and at perfectly safe sport areas.

If you’re one of the lucky few who doesn’t have these days, congratulations. Please don’t judge the rest of us!

I had one such day recently, on a nice early-autumn day in Dream Canyon, Colorado, a granite sport-climbing area with lots and lots of bolts, some so close together the rock looks like it has bolt acne. Climbing—any climbing—felt like a horrific proposition. My feet, though I placed them carefully on the holds in a new, well-fitted pair of rock shoes, seemed constantly on the verge of slipping. At every clip—on a closely bolted sport climb—as I pulled up rope, I pictured myself oozing off the stance with slack out and taking a massive fall. My skin felt simultaneously both too slick, from grabbing chilly rock, and too moist, from panic sweat. More than 20 feet off the ground, I clenched up at the exposure and climbed like a robot in a body cast. Even on toprope, I could not bring myself to try moves that took more than 30 or 40 percent effort because I was so gripped about slipping.

Nothing felt right; everything felt wrong: The rope’s going to break! The draws won’t hold! My belayer will drop me! I needed to be in control, but of course could not be by dint of trying so desperately to control everything. Nothing in particular had precipitated this—not a climbing accident or major life trauma. I was rundown from too much late-summer climbing, and in a period of higher life stress at work and financially. And so the fear-regulating part of my brain decided to go on vacation to Bermuda, leaving my body to fend for itself.

Some people are able to push through on days like this, to “Feel the fear, do it anyway.” Maybe they take a practice fall to clear their head, or go off into the woods to meditate or weave dandelion bracelets or write haiku or sacrifice a goat or something—I have no idea. But somehow they make it work. After 30 years of climbing—more than enough time to embrace my inner wimp—I’ve come to realize there’s not much I myself can do on high-terror days other than climb what I can and wait for the fear to pass, which it usually does in a day or two. Pushing into it usually makes it explode in my face until I lose all desire to climb, until I take my harness off and go into the woods to sulk like a sad Emo kid sipping coffee alone at Denny’s on prom night whilst journaling about life’s patent unfairness.

Still, climbing should be fun, right? Even on high-terror days, we’re at the crags, which are the best place on Earth. And the old truism that a “bad day climbing still beats a good day doing anything else” holds here as well, so you may as well stay and climb. Here, then, are five ideas for getting the most out of your experience: 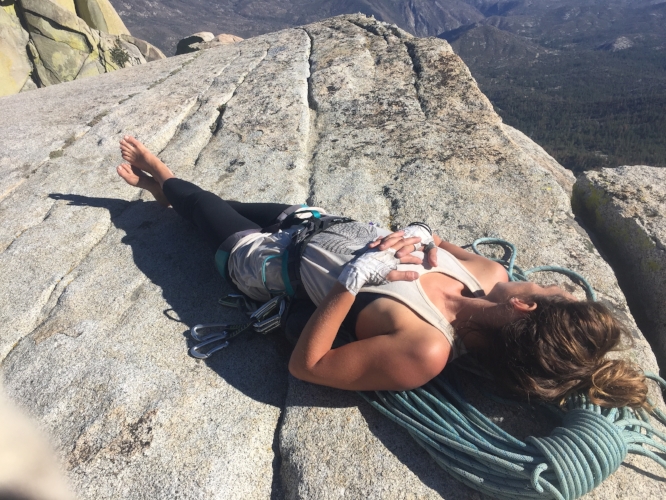 1) Don’t push yourself: That is, “Feel the fear (maybe don’t), do it anyway.” There is absolutely no shame in dropping your level down one or two number grades. Clearly, pushing it isn’t working, so why persist? I’ve found that if I get on climbs well below my limit, I can, after a few pitches, start to loosen up physically simply by reclaiming familiarity with the medium. Through the sheer act of repetition, moving over the stone begins to feel normal again, and I regain a small measure of self-confidence by getting to the anchors on a climb or two. Also, there is happiness in the act of climbing. The body remembers, even when the mind would just as soon forget—easy mileage can help you reclaim that joy by making an end run around the fear. 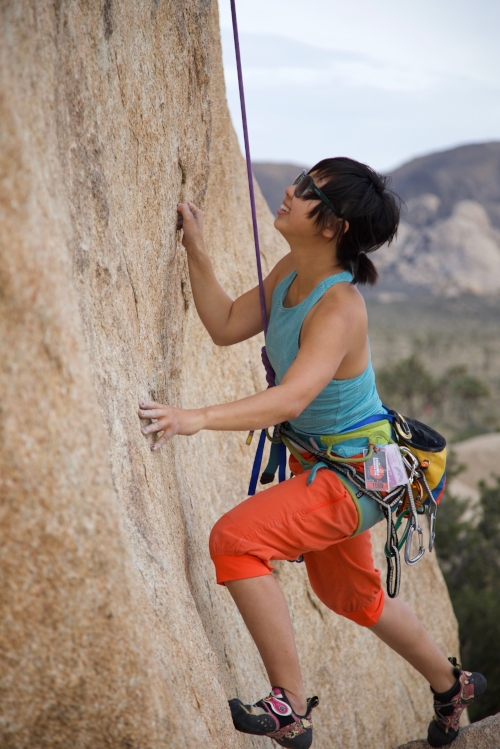 2) Toprope, a lot: If the best way to get some pitches in is on the dull end, then embrace the dull end. Tell your partner you’re not psyched to lead and then embrace the power of the toprope. Use lots of directionals if you want, to avoid swinging and to have draws to pull on when things aren’t going well. Today is not about performance—it’s about finding what equilibrium you can. 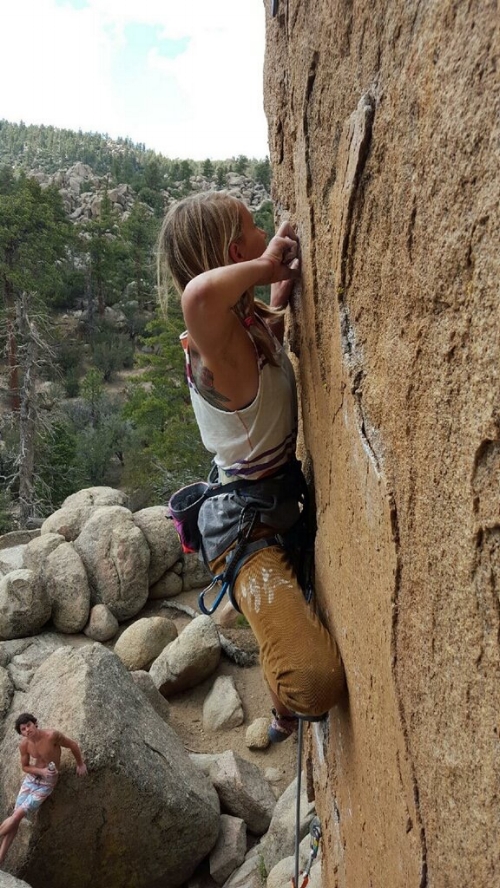 3) Make friends with the enemy: As I and other long-time climbers have learned, fear tends to come and go in cycles. It’s not permanent and it will fade in time (days, weeks, or months)—though it will certainly come back again later. Given how nonlinear fear is, the best thing we can do is make friends with it, accepting it on an intellectual/psychological level. There’s no shame in feeling fear, and beating yourself up over it will only perpetuate the fear, or worse, turn it into anxiety that further torpedoes your performance. So, accept, accept, accept. 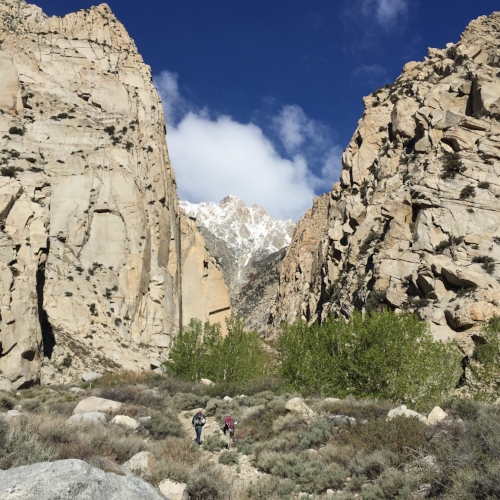 4) Be grateful to be climbing: Remember, we are very lucky to live in a country and era in which our basic survival and safety needs are met, and we have the freedom and leisure time to climb—and all this great, modern safety gear to protect us. If you’re getting down on the whole process, focus on how amazing it is to be alive and out climbing in whatever beautiful place you find yourself in, with friends, moving your body. The more I climb, the more I see that it’s an up-and-down voyage. For me, the key to longevity in the sport has been to embrace the dips as well as the summits—because for every dip you climb out of, another summit awaits. 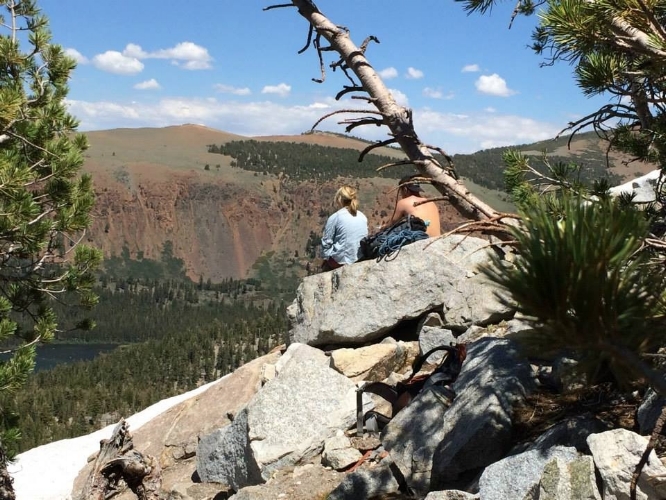 5) Support your partner: Finally, if the first four ideas aren’t working and the last place you want to be is up off the ground, then don’t climb at all. Instead, put your energy into hanging out and being a good belayer, to support your partner. Maybe she has a project she’s psyched for. Give extended belays, offer to pull and flake the rope, yell up encouragement at the crux, share your crag snacks, give backrubs and write epic poems in her honor. Odds are your partner has her fair share of bad days, too, and can return the favor down the road. Unless she’s one of those freak-people who never get scared, in which case you could “Tonya Harding” her kneecaps with an offwidth cam.

An Off the Couch Audio Book: The Tower